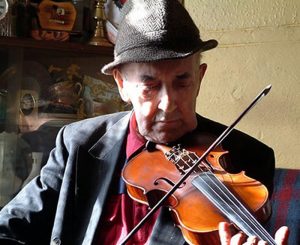 The ‘Cup of Tae’ is the name of an Irish Reel. Our festival is in honour of a renowned player John ‘The Tae’ Gallagher. Generations of his family before him made ‘teas’ on Fair Days and other days of local importance, hence the name of the festival.

The festival wishes to provide first class tuition on a number of instruments, starting with the fiddle and flute. Later we hope to incorporate more instruments, singing, dancing, recitation and storytelling. The folklore of each tune will be passed on as well as the tune.

John ‘The Tae’ Gallagher was born in West End, Ardara in 1923. At the age of four he began playing the fiddle and at the age of five he gave his first performance at a local concert.

From this he progressed to playing at dance halls and finally solo playing at special functions etc. He also performed complex duets with another local fiddler called James Josie ‘The Post’ McHugh. John ‘The Tae’ Gallagher won Oireachtas Senior Fiddle competition in 1956 and in 1959 won the All Ireland Senior Competition at the Fleadh in Thurles.